In the afternoon of October 31st, at the Kresge Auditorium, MIT, His Holiness participated in two panels under the theme ‘Change-Makers for a Better World’ organized by the Dalai Lama Center for Ethics and Transformative Values. The first panel, examining Equitable Solutions for a Changing World looked particularly at climate change. Deborah Ancona the moderator stated that the same question had been discussed in the same place two years ago, concluding that each of us needs to take a lead.

“Governments don’t do what’s necessary and we don’t do enough.” 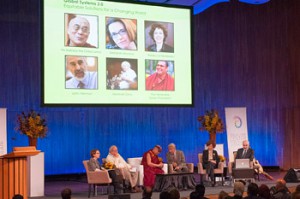 The first panel discussion on Global Systems 3.0: Equitable Solutions for a Changing World organized by The Dalai Lama Centre for Ethics and Transformative Values at MIT’s Kresge Auditorium in Cambridge, MA, USA on October 31, 2014. Photo/Brian Lima

John Sterman looked at the statistics and asserted that 2100 is not far away. If we want to prevent disaster we have to act now. Rebecca Henderson was optimistic about steps that can be taken in terms of more efficient use of energy and falling costs of alternative energy sources. She concluded that if we decide to make a difference, we can. Marshall Ganz said it would need leadership of hands, head and heart. What is required is a sense of moral urgency of the kind Rosa Parks showed in the Civil Rights struggle.

His Holiness confirmed the importance of the problem, noting that it is not as if it only affects one or two continents. It concerns all 7 billion human beings. He said:

“My concern is with the whole world. I am just a Buddhist student, but the emphasis of my practice is an altruism that must be translated into action. This kind of meeting should be held more often to raise public awareness. A lot of misplaced attitudes are the result of ignorance. The public must be informed not only of what the problem is, but also what can be done about it.”

“You gotta play dirty to win!” 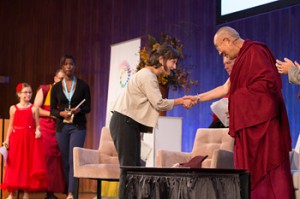 Young panelists arriving on stage to take part in a conversation with His Holiness the Dalai Lama as part of the SPARK 2014 program organized by the Dalai Lama Center for Ethics and Transformative Values at MIT’s Kresge Auditorium in Cambridge, MA, USA on October 31, 2014. Photo/Fredo Durand
The second panel on ‘Start a Spark’ featured youth in conversation with His Holiness. Jacarra Garraway first recited a poem full of hope and inspiration before asking His Holiness what piece of advice he received as a young adult that he still remembers. His answer recounted the affection he had received first from his mother and later from the servants with whom he played as a child. Noa Machover wanted to know where to find hope today. His Holiness recounted many ways in which he feels there is ground for optimism and hope, among them the increasing interest in peace rather than war.He recalled asking the British Queen Mother whether the world was getting better or not, when she was 96 in 1996 and had seen most of the 20th century. She was unhesitating in telling him the world was getting better, saying that when she was young there was no talk of human rights or self-determination as there is today. Since the 20th century was an era of such violence, His Holiness is very keen that steps are taken to make the 21st century an era of dialogue instead.Ten year old Vivienne Harr said that as far as she was concerned compassion isn’t compassion without action and asked for His Holiness’s advice. He recommended being open and warm-hearted. His concluding advice was:“You, members of the younger generation, are the only hope for the future. Please think seriously about what we’ve talked about. Look at things from a wider perspective, taking a long view. We cannot change the past, but you can shape the future.”(Credit: Jeremy Russell)